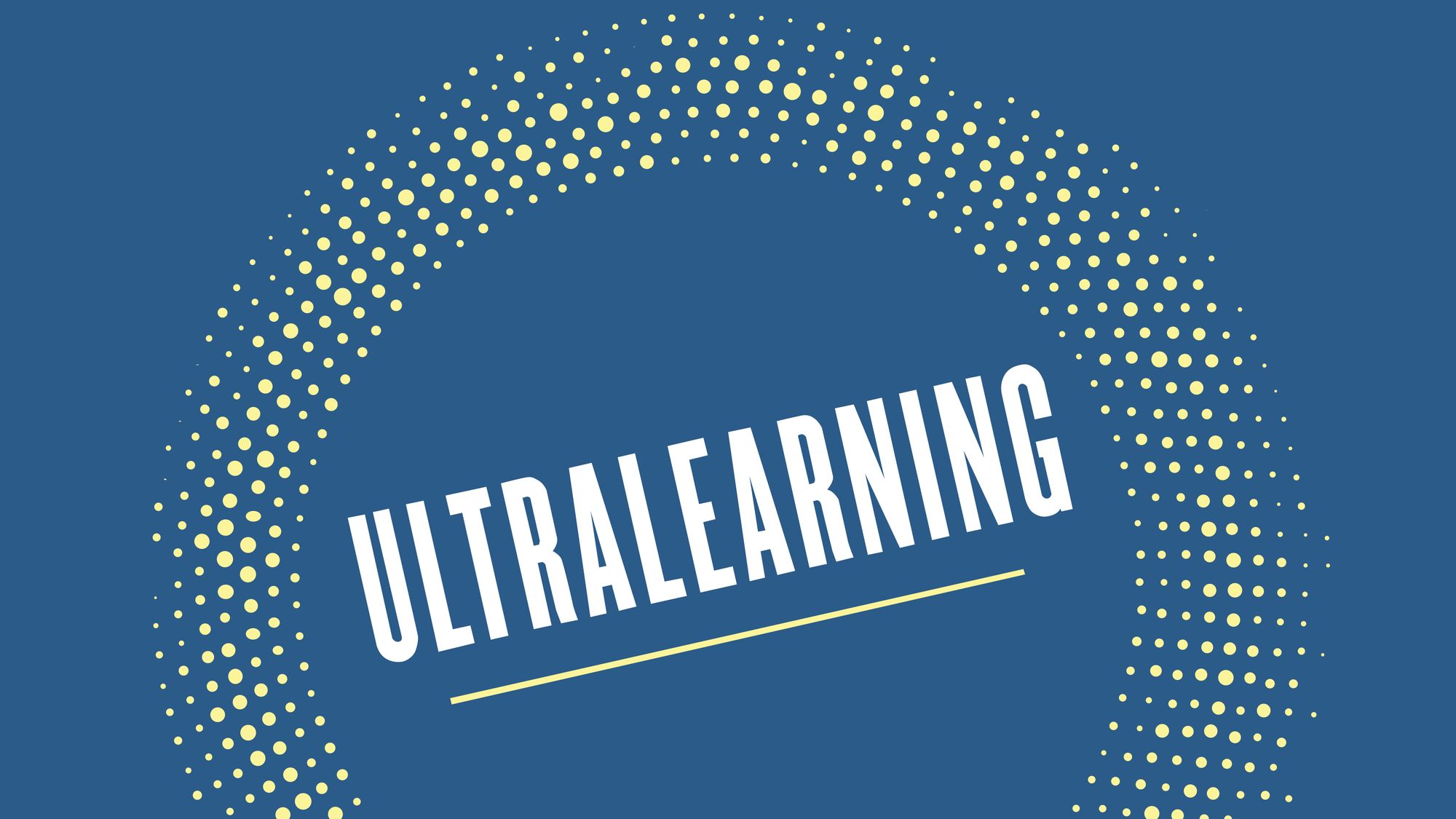 An inspiring trek through the minds and methods of the top 0.001% self-learners.

Ultralearning is justified in science but rooted in obsession.

The book lays out a framework for learning things fast. Really fast. Way faster than conventional wisdom would say is possible.

Though it’s written for a general audience, containing economic benefits and the encouraging suggestion that anyone can become an ultralearner, the secret sauce is obsession.

It’s not clear if obsession deserves a bad reputation. If you live by the “everything in moderation” rule, it seems to indicate more than a healthy amount of passion. But if obsession is put to productive use without making a devil’s bargain in the process, is it really a bad thing?

The obsessions written about in Ultralearning are not the Jodie Foster type, but driven by an earnest desire for self-betterment. And while productive obsession feels like something exclusive to geniuses, Ultralearning suggests that the results are within everyone's reach.

The idea of learning great things on a tight schedule sustained by raw self-motivation is attractive. But in order to take this seriously you need more than a “growth mindset” (the belief that intelligence can be developed), you need a “hyper-growth mindset”—something limited to the most privileged of us.

The shame is that cognitive, racial or economic factors do not prevent someone from succeeding, but the audacity to believe in oneself and try—to say nothing of the freedom to devote time and money to lengthy learning experiments—is a product of our environment.

This isn’t the place to solve that problem. But Ultralearning will either ring true or hollow to you—recounting the success stories isn’t likely to change your mind.

For those blessed with a sense of remarkable potential, Young has identified nine principles which unify most successful ultralearning experiments.

The Nine Principles of Ultralearning

Don’t just grab the nearest “Blank for Dummies” book and charge ahead. First survey the subject you are about to explore.

If you were trying to quickly learn calculus, you should find a course syllabus or two to see how broad the scope is, how long is spent on certain topics, and what sort of resources are commonly used. Collecting a number of these, you could start to see general patterns or resources that are commonly referenced. This will inform how to move forward intelligently rather than wasting time with the wrong focus.

Entire books have been written about focus—I recommend Deep Work by Cal Newport. The difficulty of finding focus in our daily lives is a major obstacle to getting basic things done. It’s no surprise, then, that high-level achievement requires not just occasional focus, but mastery of it.

First you must conquer procrastination, then train your ability to sustain focus despite distractions, obstacles, and failure. Both of these things can be deconstructed to practicing good habits, but this is a major barrier to most people.

Taylor surprised me by not following this up with a discussion of the benefits of flow state (as popularized by Mihaly Csikszentmihalyi), but by specifically calling ultralearning “unsuitable for flow”. Apparently even an optimal balance between challenge and skill is suboptimal for ultralearning.

I’ll admit I struggle with this idea. But I don’t struggle with accepting the power of focus in general. I’ve experienced firsthand the dramatic difference between working in an office and working from home. Focus is crucial.

This is the principle that pulls most of the weight.

So often we treat education like a Disneyland ride—we enter at the entrance, wait in line, and trust the person who sends our vehicle down the track. Our experience at school was a long series of such rides, being led through a syllabus that promised knowledge by the final exam.

As an adult learner, those formal classroom environments are replaced with books, apps, and MOOCs, but the principle remains the same—we follow the path set out for us.

This means you don’t aim for French fluency, you aim to read Les Misérables in the original.

You don’t aim to “learn computer science”, you aim to code a space invaders clone.

Such directness will fundamentally change the way you go about learning. It will be more interesting to you and bring results far more quickly than the one-size-fits-all approach that most take.

There are going to be things you suck at. And those are the things you will hate studying the most.

Accept this as a natural part of learning and you gain the powerful perspective that improving your worst areas is the quickest way to improve overall.

This is where drilling comes in. What do you do with 7-foot basketball centers who can’t make free throws? You make them do a lot of free throws.

Identifying your own weak points requires emotional maturity and humility. But once you’ve identified them, inventing a drill to get better is pretty easy to do. The question is: will you do it?

It’s very easy to feel confident while looking over a study guide, reading and re-reading all the facts that you will be tested on tomorrow. But the test is a different story. Confronted with nothing but question prompts and blank lines, suddenly the answers don’t seem so obvious.

Recognition is easy. Retrieval is hard.

Effective learners constantly force themselves to retrieve information. And the more general the question, the harder it is.

A flashcard question like “Who was George H. W. Bush’s vice president?” is harder than the same question as a multiple choice. But asking yourself open-ended questions like “Why did George H. W. Bush not win re-election?” will force you to think even harder about a subject.

Ultralearners drill such things because it’s hard. It exploits their gaps in knowledge and protects them from the illusion of mastery.

It’s even harder to hear critical feedback about an area of insecurity.

I have frequently given the advice that, if you’re trying to learn a language, speak with a native teacher as quickly as possible so that your flaws can be identified before they become bad habits.

But do I do that myself? No way.

You can easily trade hours or days of reinforcing bad habits by getting feedback from somebody knowledgeable. The embarrassment is not just a side effect—it's what will burn mistakes into your brain so that you’ll never forget the right way.

As someone who doesn’t take feedback well, I avoided this. But living in Japan for six years means I was bound to screw some things up. And I've never learned anything faster than the moments an embarrassing error was pointed out to me.

Everything listed above is in vain if you forget it in three months. Material must move from your short-term to long-term memory.

This can be done in a few ways:

Of the three, I've already written about spaced repetition flashcards and I'm a big believer. It does take extra effort to set up, but it means that material you learn in 2020 can be just as fresh in 2030.

The problem with flashcards is that, used by themselves, they enforce a very brittle understanding of subjects. You learn to answer questions that are worded in a very specific way, but you don't have that firm foundation that allows you to contribute in high-level conversations.

The secret to overcoming this is to ask and answer questions. Ask seemingly-simple questions that probe the edges of the material you've learned, and seek to understand how theoretical knowledge is employed in explaining concrete examples.

It's one thing to understand the wave theory of light, but quite another to explain to somebody else why that means the sky is blue. Dig deeper to understand concepts at their root levels. Try to put things into your own words.

More than the eight principles above, what unifies ultralearners is an attitude of experimentation. There is nothing more important than understanding how you learn best. Which activities are most and least helpful to you? How are you preventing yourself from getting complacent in a single style of studying?

A challenge to learn a language in three months is never really about the language. It's about your own abilities, idiosyncrasies, and potential. You look at yourself through a microscope at regular intervals to judge whether any of this is working. And even if it seems to be, ask yourself whether a change could improve things even more.

Ultralearning is inspiring—while reading it I was more fired-up than I had been all year. Even if you lack the freedom and obsession to speak nothing but Danish for three months, there are a lot of great tips that can help when learning on a more modest schedule.

But the line which will stick with me the longest is not written by the author, but is written in the Foreword by James Clear, author of Atomic Habits. He says what resonated with him about Taylor is that he has “a bias toward action.”

Those simple words indicate a whole attitude toward life and learning which penetrates through any complex methodology. Among the thousands of microdecisions which paint the color of your days and eventually your life, do you have a bias toward action? Rather than doing nothing, will you take some positive action? Rather than planning something, will you walk the first step?  Those are the words that I’m trying to live by, and the principles in Ultralearning are a way to spin that core attitude into amazing accomplishments.